In anticipation of the upcoming election, Goldman Global Arts and When We All Vote have partnered with thirteen diverse artists to create a digital art campaign that will be displayed in stadiums and arenas across the United States. Goldman Global Arts is a creative agency that curated the iconic Wynwood Walls in Miami and the Houston Bowery Wall in New York City. Michelle Obama’s nonpartisan voting organization, When We All Vote, has commissioned Goldman Global Arts to produce original artworks of American artists to create a digital platform to not only spread the message to vote, but also to inspire those to vote.

Founder of Goldman Global Arts, Jessica Goldman Srebnick, believes “art has the power to unite. It has the power to amplify messages of hope and encourage dialogue. Art has the power to create change. We are proud to work with When We All Vote to bring together 13 American Artists to amplify the importance of every vote and broadcast that message on billboards across the country while also sharing these original works in a vibrant social media campaign. It is a project I am exceedingly proud of. No matter your party, we must do our part to protect democracy, we must all VOTE.”

The murals launched on Monday, October 5th, 2020 featuring the city’s local artist and a rotating exhibit of each digital piece. The focus is to encourage civic engagement and voting among Americans. Each artist was selected for their talent and contribution to art around the world. 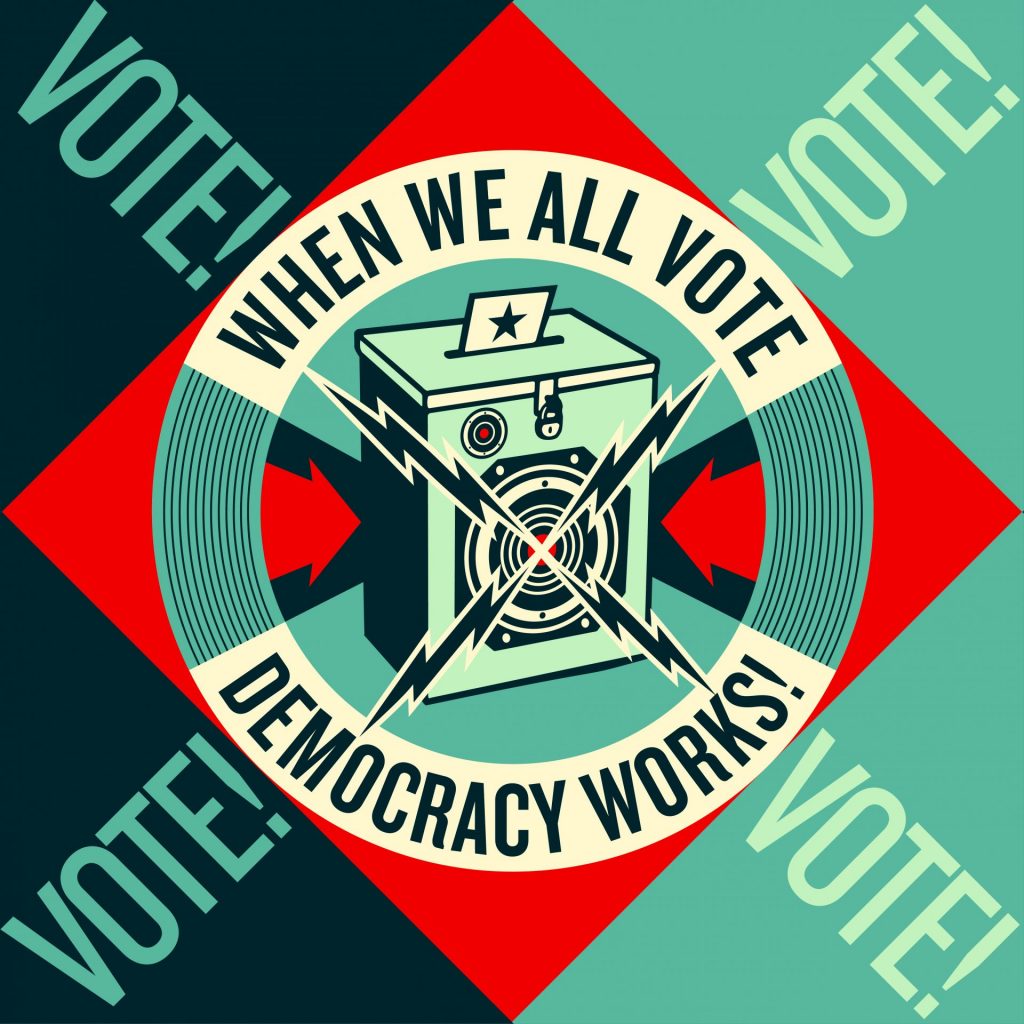 “This vote ballot box is a visual call to action that your vote counts. It’s there at the ballot box so when we all vote, democracy really does work!” 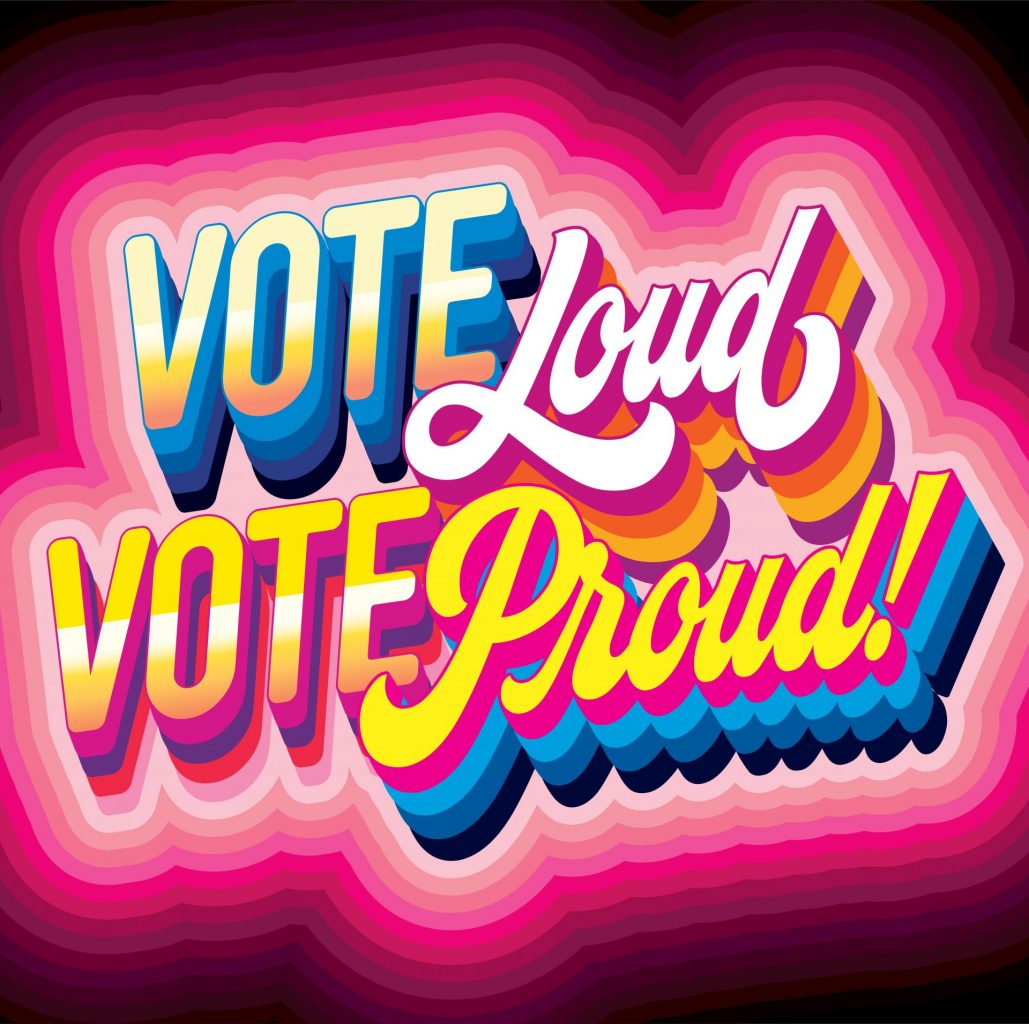 “The style of my art piece harkens back to retro American 1970’s sassy script lettering that has character and flare. I combined this classic and bold script with colorful 3D block letters to complete the phrase “Vote Loud Vote Proud!”, which is further amplified by bands of gradation color that outline the words. The bold color palette is exciting, fun, and engaging. Voting is so important during any and every election, so I chose a classic retro style to honor the longevity of sustained democracy through voting.” 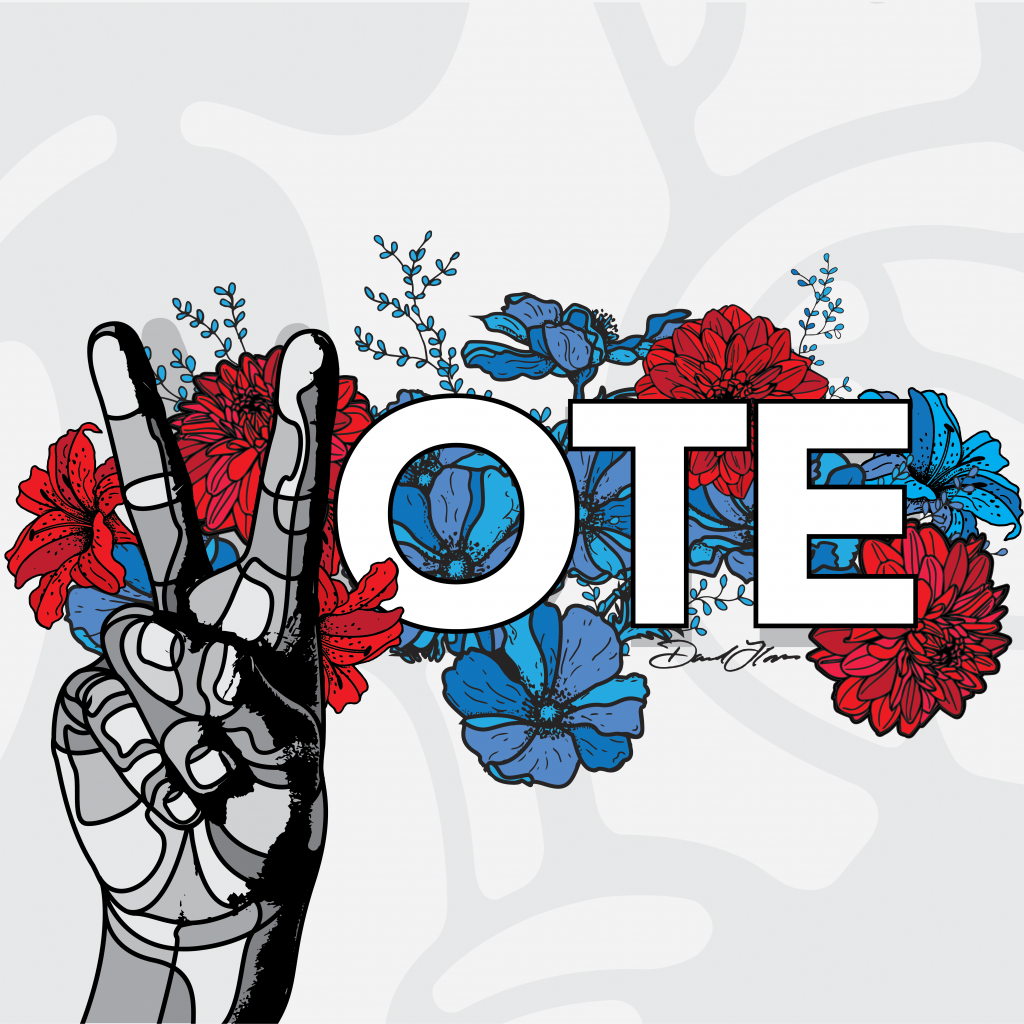 “This piece serves as a reminder of the many individuals that are impacted by our right to vote and how it should not be taken lightly. For me, I often think about my ancestors and the various Black Americans that fought for our own justice and equality, and how this same energy can be utilized for the rights of others—in my current and surrounding communities and for those that will come after.” 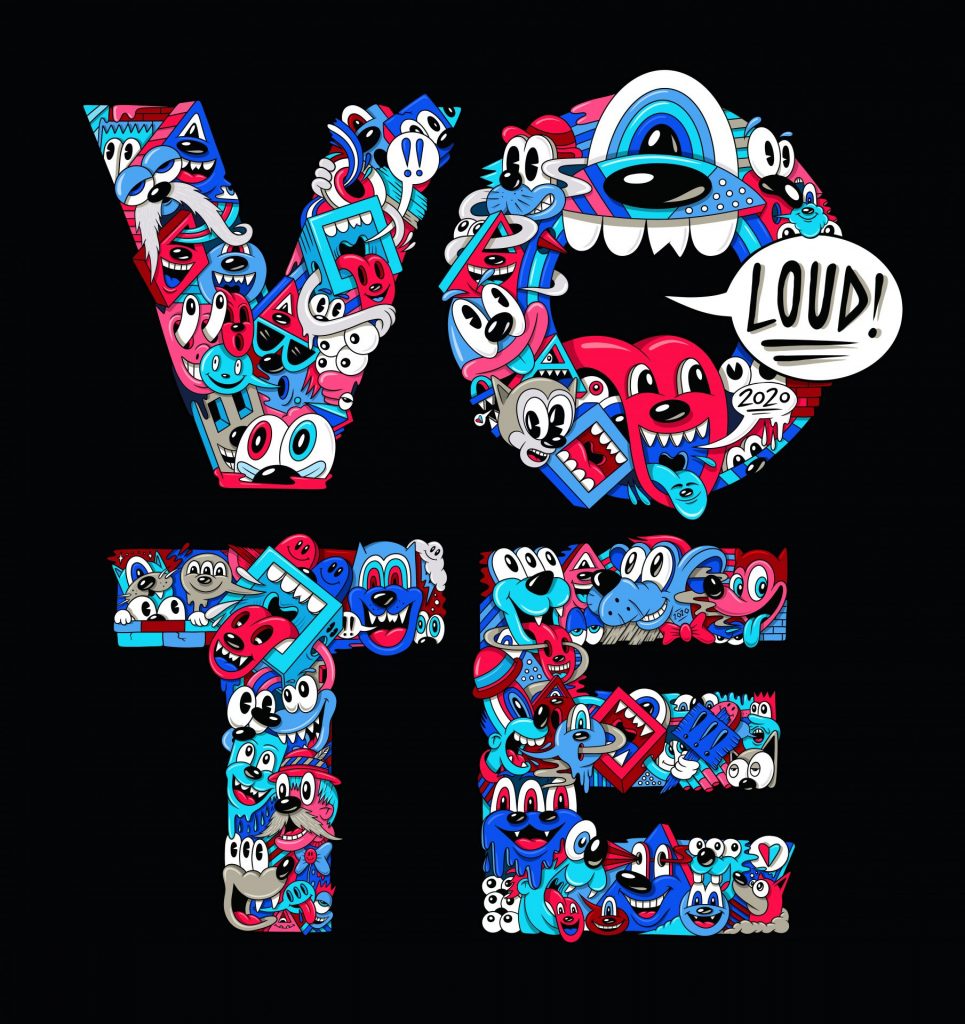 “My WWAV piece is a representation of a vast community of characters all coming together collectively to VOTE. The artwork was inspired by a piece I created in 2014 titled “PEACE OF MIND”, which featured a group of characters coming together to form a Peace Symbol in a similar fashion. I hope it’ll catch some eyes and tell a story of how it’s our duty to hit the polls and VOTE LOUD!” 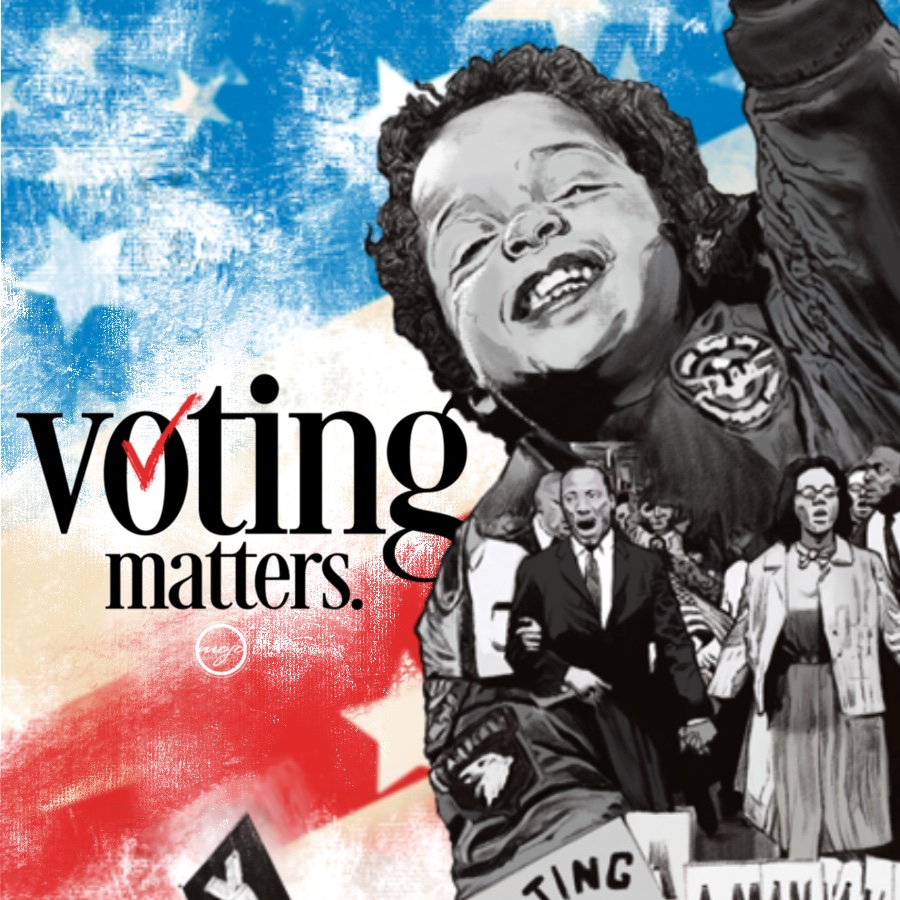 “‘Up 2 Us’ is an exhibition of Dr. Martin Luther King Jr.’s “I’ve Been to the Mountain Top” speech. As we stand on the shoulders of our American ancestors who declared their humanity with the right to vote, it’s our duty to use our voices and ballots to unite and walk side by side into our Peace Filled Promise Land.” 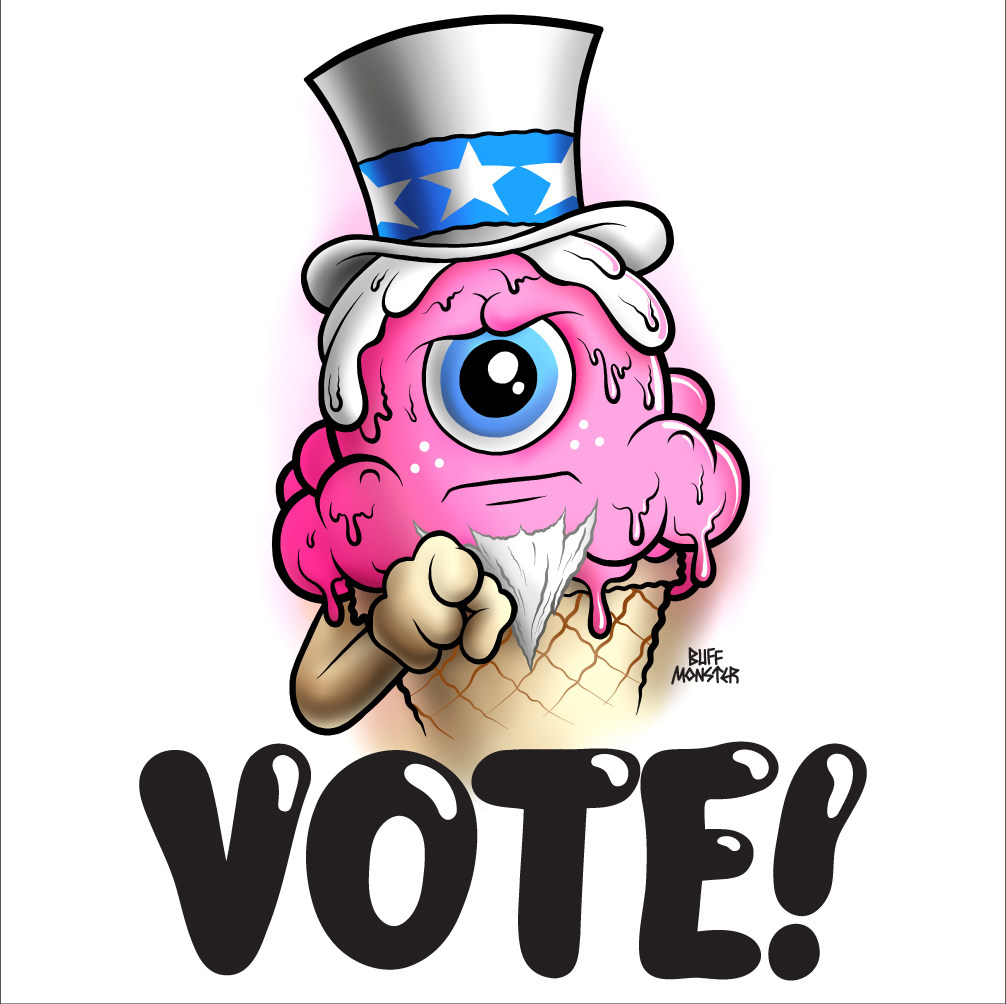 “Every election year, the stakes seem to get higher and higher. This election comes at such a stressful and trying time for so many, and will dramatically affect how we recover, collectively. Earlier this year, I donated art for some PSA posters that went up around NYC; this project allows me to continue to use my work to inspire and motivate.” 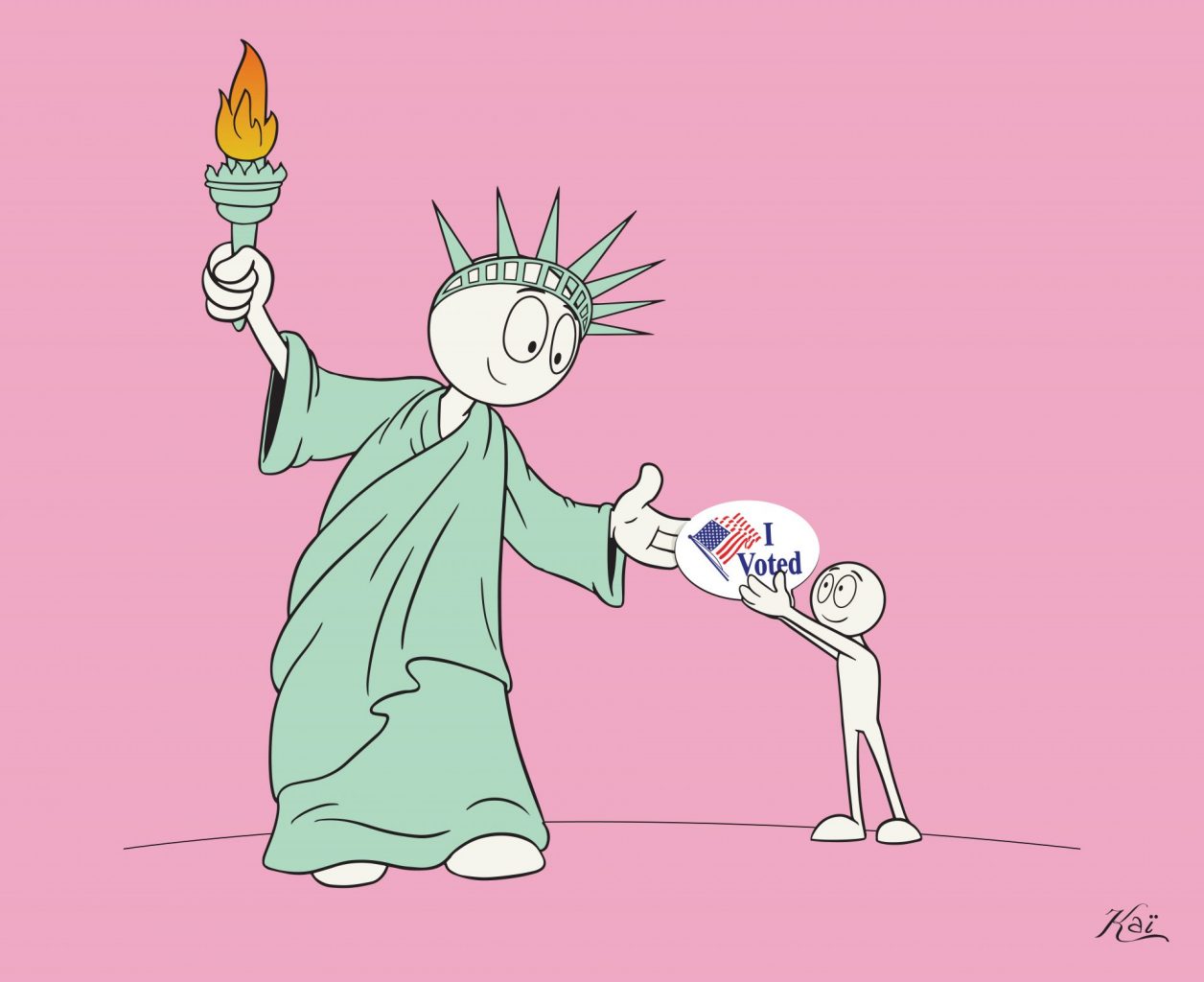 “I thought using the iconic Statue of Liberty was important because for immigrants it has always been such a powerful symbol of the American Dream and the chance to have a fair and fresh new start. Many immigrants came from poverty and unfair circumstances and the statue symbolize freedom and hope. Go vote and don’t stop pursuing your American Dream.” 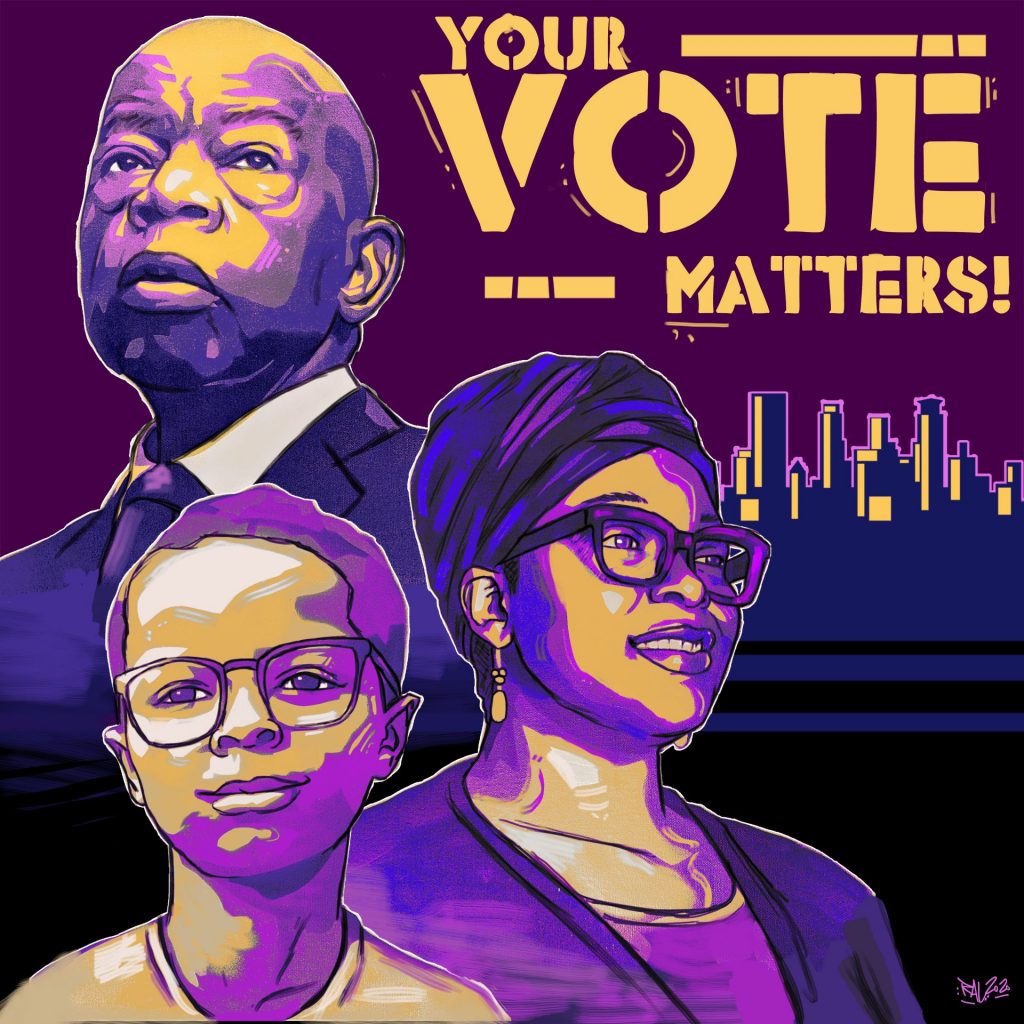 “I see this project as an opportunity to remind everyone on how the incredibly simple act of voting can impact so much more than who we elect for the Oval Office – especially with regards to the many marginalized communities in America that are affected by it.” 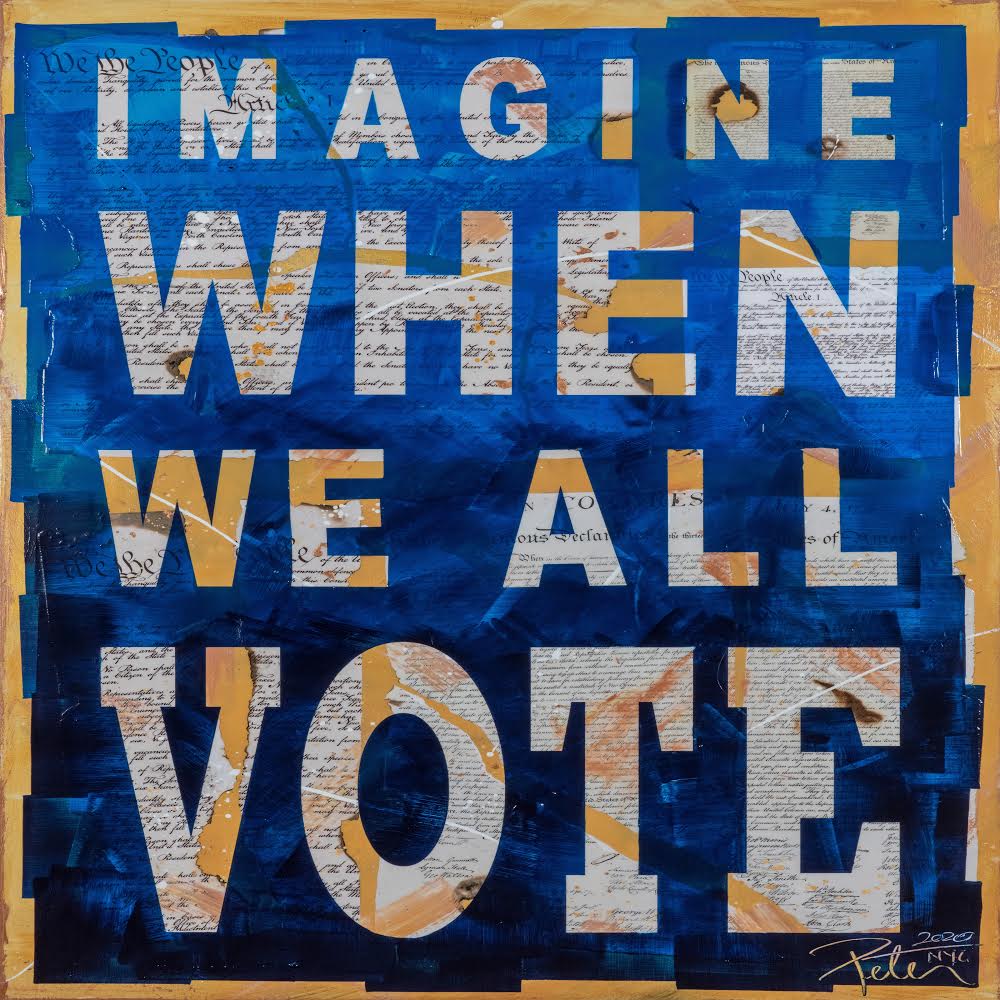 “Words do matter! Language remains our most powerful tool and form of communication. I like to sit and with each one of these 4 words. Each word is densely packed with meaning—so I like to use words—it’s what I do!” 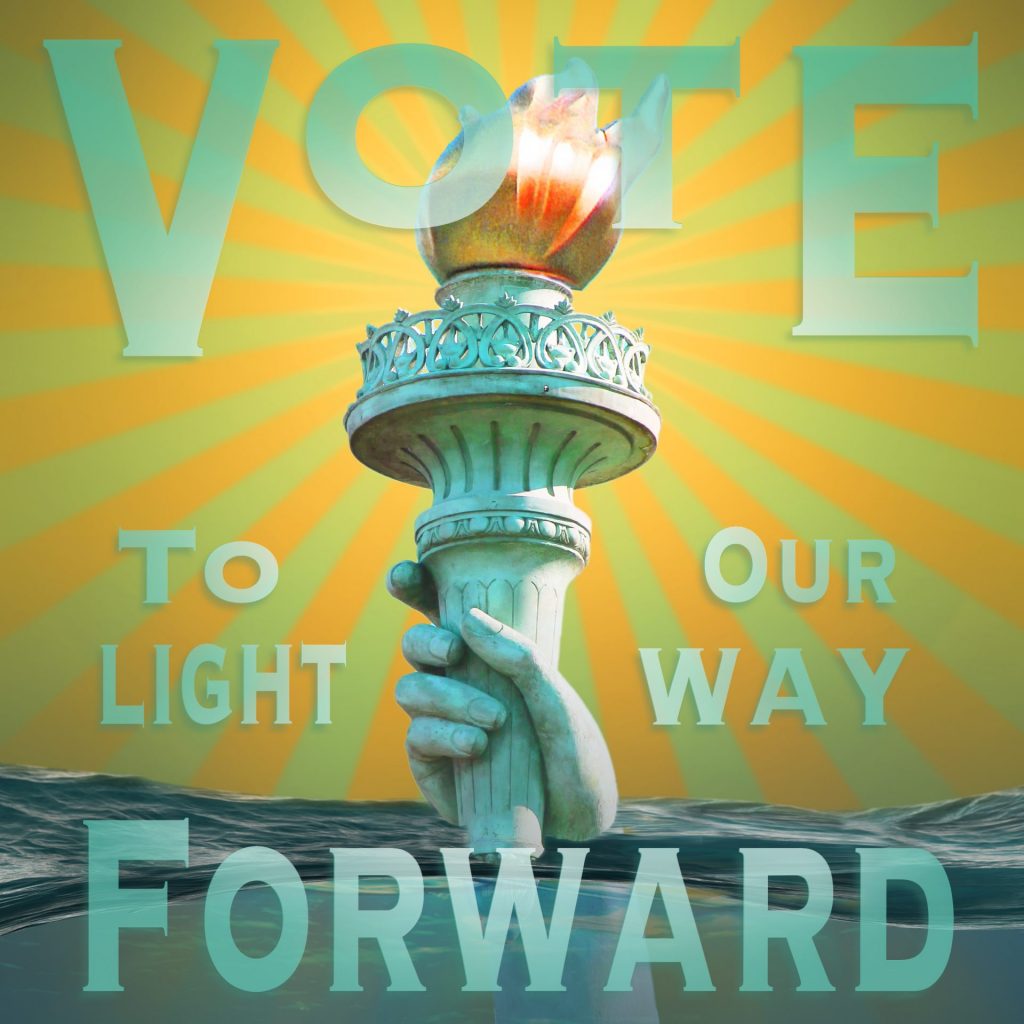 “If we can make some art to encourage a more representative outcome in this election, I am 100% into that. By voting, we are keeping the torch lit and illuminating our ability to imagine progress. Let’s make it happen.” 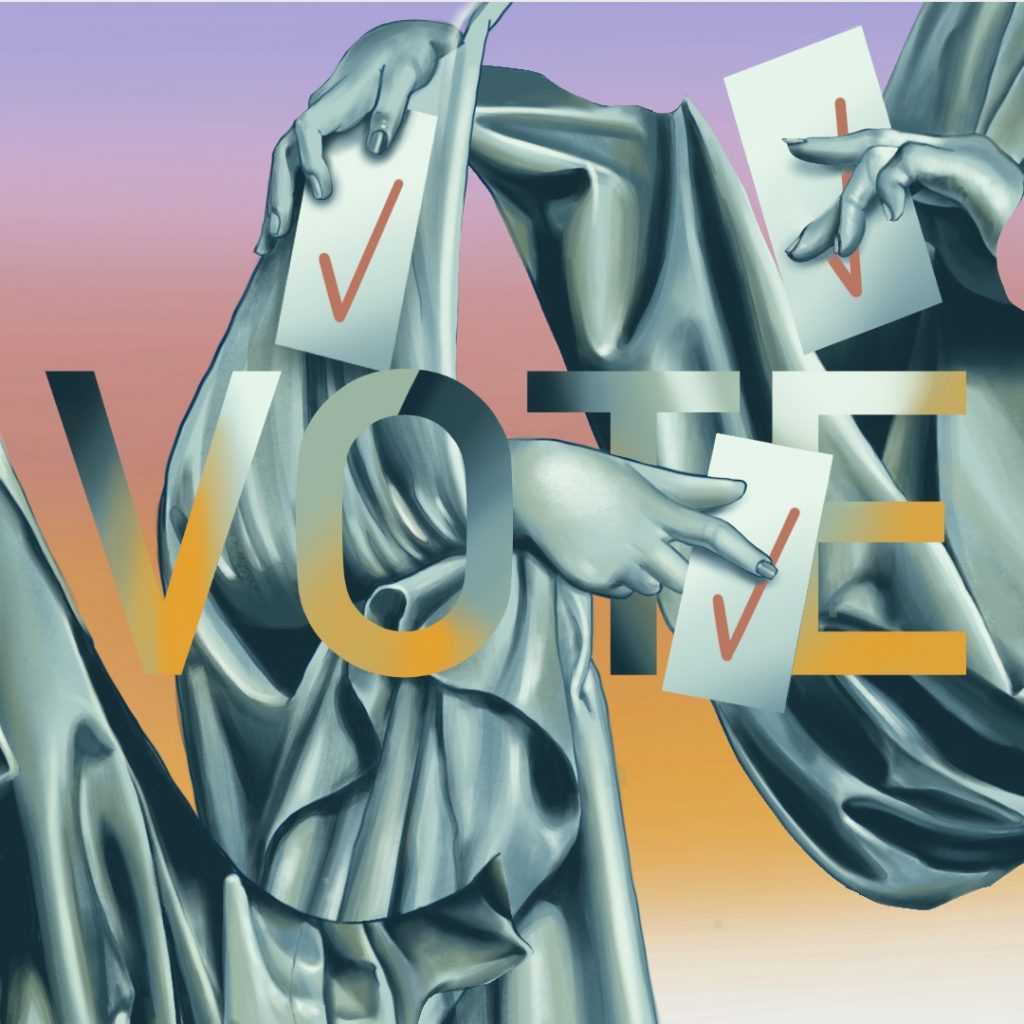 “My design is of many hands holding ballots, their arms draped in green robes that allude to the Statue of Liberty, a symbol of our free country. Textiles play a big part in my work, and this image illustrates that voting is the fabric of our democracy.” 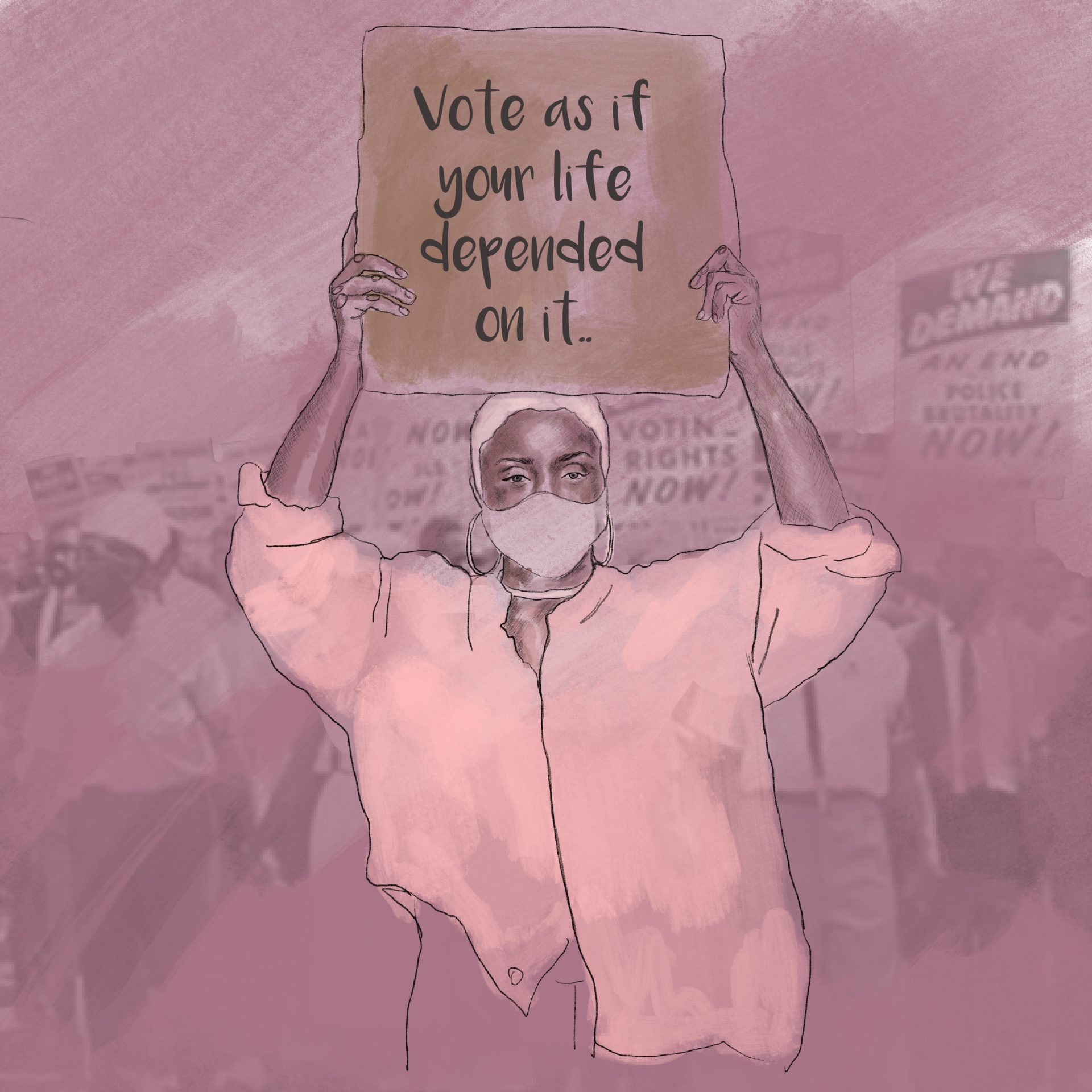 “So many people have fought for our right to vote. My artwork represents past and present. I hope that it gives people a sense of pride and honor when they view it.” 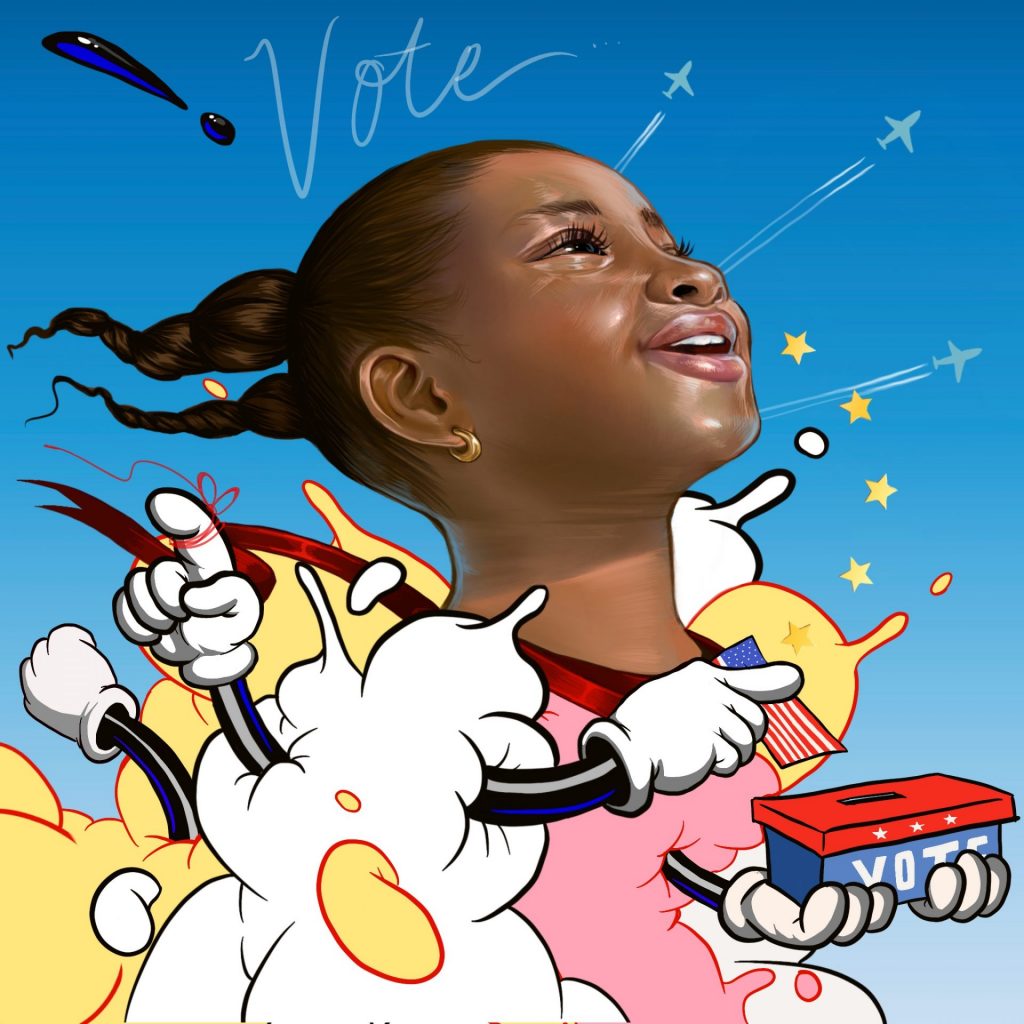 “While making this piece, I wanted to highlight the importance of the youth growing up and eventually being able to vote. They will grow up and be the voices of the next generation and we should all make sure they see this opportunity in a positive light of bettering their future.”

Craving a Pandemic Puppy? See the Dogs in Modern Art!

Object lessons: from a rare outing for an Old Testament Rembrandt to a Bernini...

Biden’s repeal of US travel ban ‘changes the game’ for artists coming from Muslim-majority...

Finding a New Hobby through Art

Mobile portraits of American life roll in to three US cities through PBS public...

Pieter Bruegel: Hunters in the Snow. Hidden Stories and Meanings

What you need to know about The Graph (GRT)

Painting of the Week: Leonidas at Thermopylae by Jacques-Louis David