The Museum as a Cultural Pivot Point

In today’s world of art and art collections, it’s not unusual to find a private collection turned into a world class museum collection, but it is rare to find one that revolves around sculpture—and becomes a museum. At Austin’s UMLAUF Sculpture Garden + Museum that’s exactly what you have. The UMLAUF exhibits the works of Charles Umlauf, the artists that influenced him, and other contemporary sculptors and artists in a fabulous natural setting. Beginning as his home and studio, then donated in 1985 to the city of Austin for public enjoyment, the UMLAUF has become a vital component of Texas’ vibrant visual arts community.

We recently spoke with Executive Director, Sarah Story, about her appointment to the UMLAUF and her vision for the museum’s future. Since starting her position in April 2018, Story has expanded the exhibitions, programs, and led the institution through a rebranding which increased museum attendance by 35% in the past year alone. Her enthusiastic demeanor and love and appreciation of art comes naturally, having been raised in a family of artists and receiving her BFA in painting and Masters in Art Administration. You might say she was groomed for her new role from an early age. After several positions at other museums, including the Ogden Museum of Southern Art, University of Mississippi Museum and Historic Houses, and Rowan Oak, Home of William Faulkner, she says she’s “excited about leading the museum to operate efficiently in order to have the most impact possible in exhibitions, programs, and events for the community.” 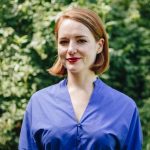 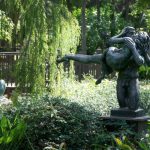 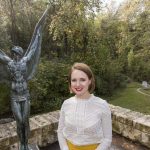 And that brings us to the newest exhibition at the UMLAUF by internationally-renowned artist Michael Ray Charles. “Not only does Michael Ray make powerful, important art, but he has been collecting historical pop culture sculptural objects for years that inflect his art,” the UMLAUF’s curator, Katie Robinson Edwards, said. “Visitors will have a chance to see his current work in the context of the objects and themes that have inspired him.” 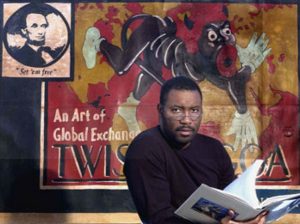 The exhibition, Michael Ray Charles, consists of three groups of images that inflect one another: a series of new drawings Charles created specifically for the UMLAUF show, his complete 2018 Flatbed Press print portfolio (featuring a poem written in response to the prints by poet and professor Meta DuEwa Jones), and historical objects lent from Charles’ personal research collection. Viewers will see that Charles uses his amassed collection of cultural objects to inspire his thought-provoking images of commentary on the social, cultural, and visual stereotypes and biases of black people in today’s world. It’s a reflection of the past, a statement of the present, and a hope and revelation for changing the future. 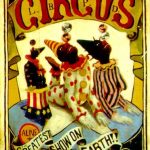 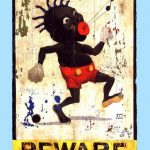 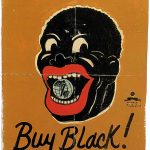 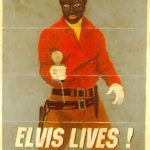 Dr. Cherise Smith, the Chair and Associate Professor of African and African Diaspora Studies and Executive Director of the Galleries at Black Studies at the University of Texas at Austin, wrote about the exhibition, “While somewhat distinct, the three groups give testament to the importance of history and historic objects to Charles’ artistic practice. Particularly evident is how Charles functions as an archivist, one who collects material and visual culture, not just to feed his imagination, but also to make a meaningful intervention in popular culture.”

“We want our exhibitions to be ever-more relevant to the wide variety of people who make up Austin and the many tourists who come to visit,” Story added. “The Michael Ray Charles exhibition boasts the perfect combination of old and new, and ties into the Austin community seamlessly. He is a talented, thoughtful artist, and we are so grateful to have the opportunity to bring his important work to Austin.”

Tying back to the community takes multiple forms at the UMLAUF—and it’s multi-faceted. The collection of more than 200 sculptures, paintings, and drawings by 20th century American sculptor, Charles Umlauf, is used as a teaching tool to encourage the understanding and appreciation of sculpture. Visitors, teachers, and students alike can take a stroll through the garden to find an incredible collection of touchable bronze sculptures.

The UMLAUF has worked with the Texas School for the Blind and Visually Impaired (TSBVI) to develop a program of Touch Tours. TSBVI faculty trained the UMLAUF’s docents and volunteers to ensure blind and visually impaired patrons have the best experience and engagement possible. At the UMLAUF, they invite and encourage you to “touch the art.” In an effort to make art accessible to everyone, the UMLAUF has implemented a program for the deaf community as well with captioned orientation videos and docents trained to interpret in sign language. 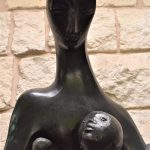 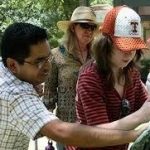 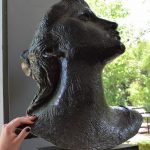 It’s Sarah Story’s influence once again. It’s a belief in the cascading impact of art and its importance and influence at all levels that becomes a key to the future of art. Quite simply, Story believes: “Museums are an asset to the community because they bring people from diverse lifestyles and backgrounds into a place that allows for contemplation, interaction, participation and discussion. Art can be a nonthreatening catalyst to spark productive conversations and interactions.”

The UMLAUF Sculpture Garden + Museum continues to fulfill Charles Umlauf’s goal of giving pleasure and enjoyment to the people of Texas and beyond. It is also fulfilling Story’s belief in the power and sway of art on the community at large.

About the UMLAUF Sculpture Garden + Museum

The UMLAUF Sculpture Garden + Museum is a non-profit 501(c)(3) organization founded around a vast collection of work by American sculptor Charles Umlauf. The UMLAUF exhibits the work of Charles Umlauf, artists who influenced him, and other contemporary sculptors in a natural setting, and provides educational experiences that encourage the understanding and appreciation of sculpture. For more information, visit www.umlaufsculpture.org, or call (512) 445-5582. The UMLAUF Sculpture Garden and Museum is located at 605 Azie Morton Road (formerly Robert E. Lee Road), Austin TX 78704.

Linda Mariano is the Editor-in-Chief for Art Business News and Managing Director of Marketing for Redwood Media Group. With a career that spans 30 years, Mariano is a leader in marketing, brand management, e-commerce and promotion initiatives for major retailers, specialty retail, art industry, licensing partnerships, media and entertainment, as well as entrepreneurial business environments. For Redwood Media Group, Linda oversees the marketing and brand extension efforts of the company.