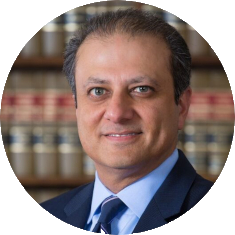 Preet Bharara has a more impressive résumé than most people can even fathom. Before writing his New York Times best-seller “Doing Justice: A Prosecutor’s Thoughts on Crime, Punishment, and the Rule of Law,” and hosting the podcast Stay Tuned with Preet, he served as the U.S. Attorney for the Southern District of New York for a little less than eight years. He made a name for himself there prosecuting white-collar crime. After prosecuting numerous cases of insider trading, corruption and money laundering, Bharara has expansive insight into what factors allow fraud to start, and to flourish, in organizations.

Bharara told attendees at the 2019 ACFE Fraud Risk Management Summit that culture is one of the most important facets he saw in preventing fraud. During his tenure at the U.S. Attorney’s office, there was one hedge fund they were investigating for fraud that kept touting their compliance program. Bharara asked some employees of the hedge fund, “I’m just curious, can you cite me one example of a time when the head of the firm ever — in an email, in a speech, in a memo to the office, at a holiday party — one time ever said that integrity is important? That honesty is important? And that doing your trading the right way was important and that crossing the line would not be tolerated?” he said. “And the answer I got was, ‘we have these great compliance programs.’” Bharara told attendees that although compliance programs are important, they aren’t worth much if there isn’t a culture that supports adherence to them. “We arrested more people at that hedge fund than any other place.”

Bharara said that although technological advances and regulations are moving in the right direction to help prevent and detect fraud, “I worry we forget about the basic stuff.” One point he stressed was how important it is for organizations to encourage asking questions. “In real life, a lot of the answers to the most difficult questions are not available in a book,” he said. “The way you get the right answers to things is, as a junior person, you’re comfortable asking questions, and as a senior person, you’re comfortable looking a little silly.”

More than just asking questions, he also said leaders need to set the tone at the top to encourage employees at all levels of an organization to think expansively about their roles. “You have to empower every single person … every single one of them should be thinking of a small improvement they can make,” he said. “You want to create a culture where people are thinking about those things. How can you do something that makes things a little faster, a little bit better, a little bit safer, a little less fraudulent, those are important things.”

He said doubt is also a useful tool for finding the truth. Instead of accepting the facts you’re provided with at face value, it is important to do your own analysis. To illustrate how large of an impact that can make, he shared the example of Eric Glisson, who was wrongly imprisoned for murder. Glisson had been in prison for 15 years when he wrote a letter to the U.S. Attorney’s office asserting his innocence. Fortunately, it ended up in the hands of investigator John O’Malley. Instead of accepting that the previous court appeals, and subsequent denials, were enough, O’Malley reread the trial transcript, re-interviewed people and was able to get Glisson, and three others, exonerated.

“Duty is a word we don’t use often enough,” said Bharara about O’Malley. “It’s not the first mistake that’s the problem … the problem is persisting in the mistake, and the failure to reconsider.”

Bharara encouraged anti-fraud professionals to look to O’Malley’s example to challenge the status quo when it comes to investigation; and even stressed that it is the duty of investigators to do so. “You think about the bad, malevolent corrupt people, but then you have to think about systems in which such a bad, tragic outcome can happen even when people are trying to be good,” he said. “Good laws are not enough if you don’t have good people.”