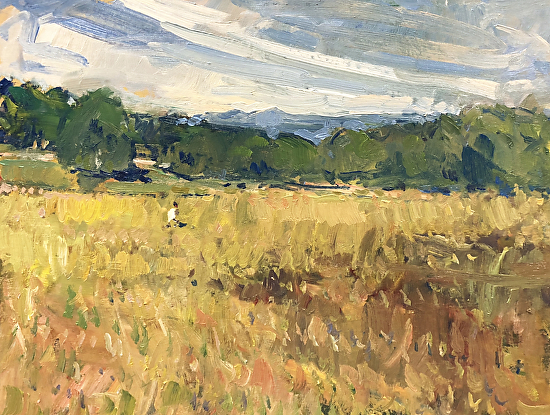 Summer Field by Richard Oversmith was selected as a Finalist in the June 2019 BoldBrush Painting Competition.

Richard received formal training in Fine Art and Illustration at Kendall College of Art and Design in Grand Rapids, Michigan. While at Kendall he was invited to study at the Royal College of Art in London, England. There he gained experience in plein air painting and found direction in his work as an oil painter. He graduated from Kendall College with a Bachelor of Fine Arts degree in 1995 and moved back to his home state of North Carolina to pursue his dream of becoming a professional artist.

The natural beauty of Western North Carolina has proven to offer infinite inspiration for Richard's impressionistic landscapes. From rolling mountains to abundant waterfalls, the majestic Biltmore Estate to a simple farm scene, this region evokes the artist’s muse. Richard finds inspiration not only at home but in his many travels. He has painted all over the USA and has taken several trips overseas to France and Itlay. Whether at home or abroad, Richard surrounds himself in the elements of the scene while painting, in true "en plein air" fashion. In the studio, his sense of vision and mood guide him to produce still lifes ranging from the classic to the imaginative.

Richard's purpose in painting is to provoke the viewer to interact with his pieces. His paintings are his voice, and stroke by stroke, he composes a whole that relates his vision. Richard works in oil on linen, a medium compatible with the passion he puts into his creation. He strives to achieve a mood in every painting through the use of such visual stimuli as color, edges, value and drawing. He has derived his style from the lifelong study of past masters, the influence of contemporary painters he admires, and elements that have evolved from deep within himself. He allows the setting to speak to him, creating only as many brushstrokes as are needed for the viewer's eyes to understand and connect.

How to pick a stake pool — time to crunch the numbers

Christie’s exhibition of Black art is not about virtue signalling, curator says

Art, enlightenment and plenty of sex—life according to John Giorno

IFRS 9 and the loan loss lottery

Crypto in Korea — the Past and the Future.

Met interns will cease toiling for no pay

Norman Rockwell Museum teams up with leading cartoon artists to offer some much needed...

Gerry’s Pompeii under threat once again

Ordering Food and Investing in Bitcoin

Announcing our new podcast: A brush with…

Germany boosts art acquisition budget to €3m from €500,000 to support artists and galleries