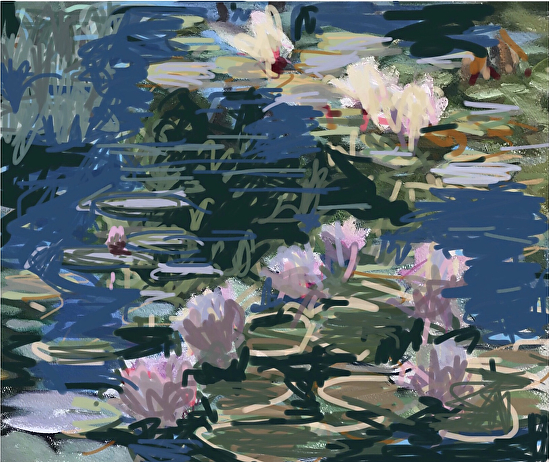 I was raised in New Mexico and we now live in the far South Valley where we grow many fruit and nut trees, flowers and an extensive garden. I have always had to divide my time between many things, and the building, designing and finish work of tiling and painting this house, became the biggest creative project I have ever done. My painting and drive to make images is usually a personal response to my life and has been open to change as a part of the natural order of our lives. I have used many mediums, done people, interiors, still lifes, abstractions and landscapes. I do not see them as single subjects to be isolated like a category, but as magnetic and as a place in my experience with meaning. Our lives are passing through these places and visual experiences. I think my qualifying identity is in how I use color and is settling into two distinct styles of paint approach. The quick successful sketch, to catch the immediacy and temporary on paper or canvas and then the longer haul of intense changes, memory work, going back to the site many times, with drawing and reworking ideas to arrive at something I can't put into words. This process is hard, frustrating and can fail completely. I can put a piece aside for a year or two, look at it one day and know what I need to do. I have written some more about the individual paintings on this web site.  Please enjoy!

Painting of the Week: Pierre-Jacques Volaire, Eruption of Mount Vesuvius

SA-CCR, IM relief and the fuzziness of good behaviour

Introducing the Cleveland Museum of Art

Painting of the Week: Pierre-Jacques Volaire, Eruption of Mount Vesuvius

SA-CCR, IM relief and the fuzziness of good behaviour

Introducing the Cleveland Museum of Art

Slow Down to Speed Up

Systemic US banks shed $70bn of repo exposure in Q4

Capitalising on its acquisition, Art Gallery of Ontario unfurls a Diane Arbus retrospective

A ‘sanctuary’ devoted to Alexander Calder will open in Philadelphia

From Koolhaas and the countryside gang, a departure from radical urbanism

The Pain of Disappointment

Three exhibitions to see in London this week

A Van Gogh and a Monet: you win one and lose another

Coronavirus: Beijing’s Jingart is the latest Asian fair to cancel

Contagious defaults in a credit portfolio: a Bayesian network approach

Monet for nothing: Musée Marmottan’s ‘self-portrait’ is downgraded

Who owns the Parthenon Marbles?