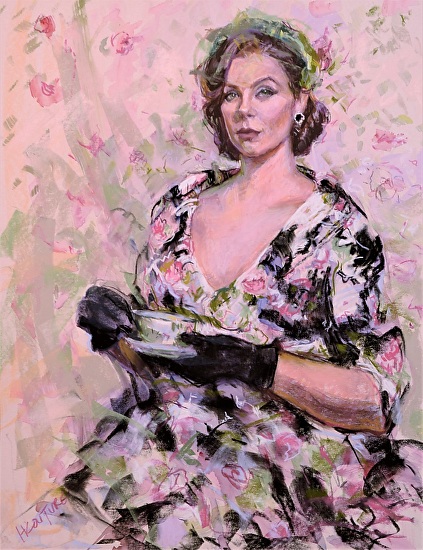 I Just Love a Good Tea Party...Don't You? by Hilarie Couture was awarded Outstanding Pastel in the June 2019 BoldBrush Painting Competition.

Hilarie started to draw at the age of two. She drew faces that resembled Margaret Keanes' sad eye kids from the sixties, ballet dancers and horses.  Her love of art continued through high school, and she entered college at Washington University in St. Louis, as a fashion design and medical illustration major. She attended college for less than two years, discouraged that the core classes for her major had nothing to do with art. She left school and hitchhiked out to San Francisco to draw portraits in charcoal and pastel on the streets. With virtually no formal art training, she was able to survive by selling her portraits and traveled around the country doing that for a few years.

One day she met a hairdresser that traded a haircut for a pastel portrait drawing and convinced her to go to beauty school to get a "real" job. After a few years in the cosmetology field, she started taking photography classes and loved developing film in the darkroom and styling the photo shoots. She pursued both the hair and photography, but abandoned her drawing skills completely for over thirty five years.

As life took over she continued working in different fields to make a living.  She became an auctioneer, appraiser, and realtor owning a combination salon, auction gallery and antique mall where she performed all of those jobs together under the same roof.   All of these careers provided a creative outlet for her, but  in 2010, at age 55, Hilarie went back to college and got a degree in historic building preservation.   A new door opened  to her renewed artistic path. One of the classes required her to paint a mural that won an award.  Upon viewing the project, her instructor remarked that she had missed her calling and that she should have been doing art all along.  That experience was an eye-opener and now Hilarie is oil painting and attempting to make up for lost time.  She is  a full time artist, life long learner and seeks creativity daily.  Although self taught, she has attended workshops from some notable artists whom she admires such as Dan Gerhartz, Carolyn Anderson, Zhoaming Wu, Casey Baugh, Max Ginsburg,  Slava Korolenkov, Eric Bowman, Mitch Baird, and Rose Frantzen.

"All of the history of my life   informs what I do,  all those trials and triumphs  translate to the canvas… I believe that the portraits and figures give me what I have always strived for, as I so desperately wanted a connection with people, to feel loved and validated from an early age.  Portraits… probably because facial recognition  is the first form of communication.  The intimacy that becomes through sitter to artist to viewer is a very personal bond…  however eye contact can be uncomfortable  in a painting  as Margaret Keane said…  eyes are the mirror to the soul. I think my paintings tell their stories and mine through the faces ."

"I believe that God gave me this natural gift ,but the more I have grown to understand art, the harder painting has become.  Naively, at first I remember not really thinking, just enjoying the process of painting ,but now that I know things, it is hard.  I still enjoy the process but I am constantly asking myself..what is the color, temp, value …are my brushstrokes expressive enough, etc... It is a journey.

I am primarily a direct painter, prefer life but work from photos,  I prefer oil for its various qualities ...thick to thin.then pastel, oil pastel colored pencil ,charcoal, and experimenting with mixed media and water media.  My journey has taken me from photorealism to romantic impressionism to what I now want to do .. as  contemporary abstracted reality.  Which brings me to the thought ... is  there really anything new in art?  Someone else has already probably already done it.

My heritage is Russian and I'd like to think  I am secretly channeling Fechin as he died in 1955 ,the year I was born so I could carry his legacy.   I feel that my work has the energy of the Russian impressionists and I strive to execute the color and light effects with paint.  I love so many masters...  Bongart, Mancini, Sorrolla, Sargent, Zorn, Waterhouse, Mucha, Klimt,  etc. Richard Schmid  and on and on  so many contemporaries…..I discover new artists daily, …

My work, like painting itself, is about  contrasts.   It is  an attempt at balancing the chaos and order, just like my life…I am now painting over earlier canvases leaving some of the image exposed.. I am wanting to try more mixed media elements in my work and be less literal overall ,letting the viewer fill in the details….finding their own story in it ."

Hilarie Couture’s art is gaining interest with new collectors all over the country. She has been showing work in various galleries and businesses in the Portland / Vancouver area, represented by Attic Gallery in Camas, Washington, and is  currently seeking representation in other areas.   She also teaches workshops, classes and does portrait and other commissions in her studio/gallery in Vancouver, Washington.

Memberships past and present

At US Capitol, a new president and vice president greet 1859 painting with a rainbow theme

At US Capitol, a new president and vice president greet 1859 painting with a...

Trove of Surrealist publications and paintings donated to Dutch museum

In pictures: Donald Trump’s presidency as the art world saw it

A brush with… Tal R

How can you reduce your bitcoin transaction fees?

All in the mind

‘A win for internationalism’: what a Biden presidency will mean for the Chinese art...

Patti Smith marks US inauguration day with rendition of her song The People Have...

Is Kylie Jenner the New Venus? Interview with the Artist Marco Battaglini

Pennsylvania artist charged with violent entry and disorderly conduct after posting selfies from the...