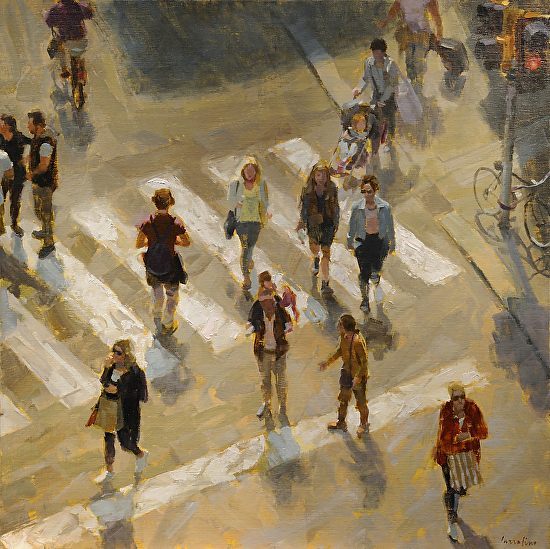 Born in Annapolis, Maryland in 1952, Charles studied painting and printmaking at Virginia Commonwealth University and Syracuse University, graduating with a BFA in Painting and Printmaking in 1974. A signature member of Oil Painters of America and the American Impressionist Society, he has had numerous one-man shows on the East Coast as well as in his adopted state of New Mexico.

A lifelong fascination with color expressed itself initially in abstract painting, but since moving to northern New Mexico in 1981 the brilliant high desert light dictated a change in the direction of his painting. Years of attempting to capture aspects of that light resulted in an artistic output dominated by landscapes, street scenes and gardens. In the past two decades numerous visits to France and his ancestral home, Italy, have opened the door to a growing range of subject matter, from the small harbors of the south of France to the calli and canali of Venice. Numerous paintings of cafes and open-air markets are evidence of a growing fascination with human interaction, personal space and body language as well as a continuing appreciation of interior space and exterior architecture.

Living in New Mexico has provided something of a “continuing education experience” owing to the lessons taught daily not only by the radiant light but through the cross-pollinating conversations regarding technique and aesthetics that are inevitable in an area teeming with painters.  Influenced early on by the Impressionists, Iarrobino was later to find inspiration (as have so many others) in the masterworks of John Singer Sargent, Joaquin Sorolla and Anders Zorn.  He owes an additional debt of gratitude to 20th century masters Henri Matisse and Richard Diebenkorn as well as contemporary luminaries such as Quang Ho, Dan McCaw, Jon Redmond, Terry Miura and Ben Aronson - and others too numerous to list.

“The  painterly approach I embrace presents recognizable images in which the paint is celebrated and brushstrokes are not only visible, but are intrinsic to the success of the image. The completed painting, while quite possibly analogous to nature, needs to be inherently faithful to itself.”

As most of the world’s art fairs have been cancelled or postponed, Hong Kong launches a new one

London’s Southbank Centre may stay closed until April next year due to massive financial...

As most of the world’s art fairs have been cancelled or postponed, Hong Kong...

‘A resting time for the art’: with museums shut, US conservators seized on strategies...

An Interview with Emily Thomas

Painting of the Week: Kikukawa Eizan, The Courtesan Hinaaya of the Chōji House

What is Whitechapel gallery chief Iwona Blazwick reading during lockdown?

Three virtual readings to check out this weekend

How to build a dapp on a private Ethereum network : Part — 4

Build A Personal Monopoly with Your Art Business

Executed by the Nazis: the story of Vincent van Gogh’s brave great-nephew

Raphael: as great as Leonardo and Michelangelo?