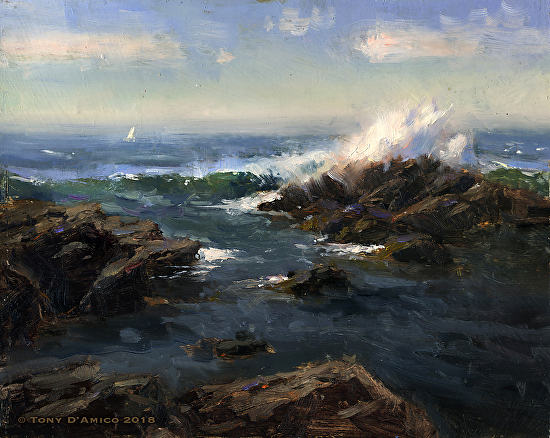 Sea Spray at Marshall Light by Tony D'Amico was awarded 2nd Place in the May 2019 BoldBrush Painting Competition.

Beginning employment as a commercial artist/illustrator, Tony enjoyed a successful career in the corporate world working for such companies as PepsiCo, Playtex and American Home Products. He later founded his own promotional marketing agency, Creative Alliance based in Southport CT. The client roster included, The Pepsi-Cola Company, AT&T, Tiffany & Company, ebay and the Guinness Importing Company. Evolving into one of the top promotion and event marketing agencies in the US, he later sold the company to the Publicis Group, an international advertising and media services conglomerate.

Channeling his creativity into a full time career as a fine artist, Tony has studied with a number of nationally recognized artists such as Donald Demers, Matt Smith, Joseph McGurl, Ray Roberts and Phil Starke. The diverse subject matter of his work is most often fueled by his plein air experiences along the east coast.  He has won many awards for his work including an Award of Excellence in the Oil Painters of America Eastern Regional Exhibition, 2nd Prize at the National Oil & Acrylic Painters Society International Online Competition and the FASO Bold Brush Award. He is a signature member of the The American Impressionist Society, as well as a member of the Salmagundi Club NY, Oil Painters of America, National Oil Painters & Acrylics Society, and Plein Air Painters of the Southeast.

• Purchase Award for "Dappled Light on the Boathouse

• Merit Award for "Dinner at The Swan"

Recognized as a Signature Artist by the American Impressionist Society

• The Charles Dana Gibson Award for "Life Under the El"

• Award of Excellence for "Low Tide at Siesta Key"

• Honorable Mention for "The Chasteen House"

• Award of Excellence for "Snow Tracks"

• The Salmagundi Club Award for "I'll Meet You At The Clock"

• Honorable Mention for Quick Draw "Conversation at the Edson Mansion"

Instead of permanent space, Smithsonian will co-curate gallery at V&A East for two years

New show of Angelica Kauffman—one of the most lauded artists of her time who...

Instead of permanent space, Smithsonian will co-curate gallery at V&A East for two years

Object lessons: from a manuscript globe of Mars to a Baroque female self-portrait

Museum of Chinese in America starts fund-raising after loss of its archive in a...

Grenfell Tower tragedy to be memorialised in film by Steve McQueen

Painting of the Week: Jean-Baptiste Chardin, The Monkey Painter

150 Years of the Metropolitan Museum of Art

Your Attitude About Auctions

Art Basel in Hong Kong exhibitors call for 50% discount as concerns mount over...