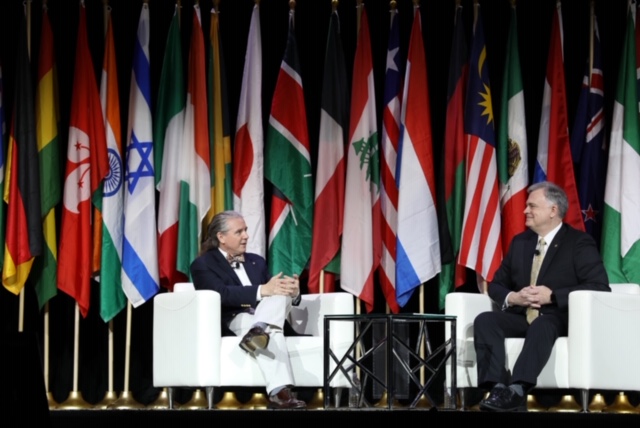 “I was desperately in love with the things of the world,” said convicted fraudster* Tom Hughes at the closing session of the 30th Annual ACFE Global Fraud Conference. “I had to have stuff that would never love me back. Whether it was electronics in the house, or a new camera, or a new guitar or a weekend in Bermuda with my wife, I had to have stuff.”

During a Q&A interview with John Gill, J.D., CFE, ACFE Vice President – Education, Hughes detailed his motivations behind his crimes and why he began stealing from the bank in the first place.

At the young age of 17, Hughes went to work for a bank and told Gill that it was only a week before he had his hand in the till, literally. During training for his new job, his manager explained to him that there were certain procedures in place to make adjustments at the end of the day if the till was short. She told him that $5 or $20 would be written off as a mistake, but if he was ever $200 short, they would need to run it up the chain and the consequences could be serious.

“So, you’re telling me that I can take $50 every other week and you’ll just tell me to be more careful?” Hughes said to the audience. Over the next year and a half, he would take $20 here, $50 there, and was never questioned. “The biggest crime I ever committed, the biggest amount I took in one day, was a bag of money that came in an armored car.”

Hughes explained to Gill that a driver came to deliver a bag of money from the predecessor of Kmart. When the driver arrived, the rest of the employees were busy looking for other missing cash, so a bank employee took the bag and hastily threw it under a cabinet. Hughes came across it later and said, “hey, a bag of money!” and took a strap of $20s out of the bag to bring home.

By the end of the weekend he had spent most of the money. He realized, though, that if somebody found that bag, it was highly unlikely that they would think the company it belonged to would have been wrong about their deposit amount. “Come Monday morning, my brilliant plan was that I had to steal the rest of it,” Hughes said. “The bag had to go missing entirely because I couldn’t replace the money I had taken.”

Suspicion didn’t fall on Hughes immediately. Auditors came to the bank to interview every teller. He said one auditor had him very close to confessing, but another talked him out of it. The first auditor sat across from him and said, “we know you took the money.” He detailed accelerated rehabilitation for youthful offenders and said Hughes could avoid a criminal record by giving back the money. “John, I was this close to saying, ‘I need to call my parents,’” said Hughes.

The second auditor came in and said that they knew the previous Friday that Hughes had failed to change the film in the camera at the bank. The auditor then said they knew that he took the money, hid it in his coat and took it to the breakroom, hid it there and then went back at the end of the day to retrieve the money. “Not only did he have the method wrong, he had the date wrong,” said Hughes. The second auditor was so off base that Hughes realized they didn’t actually know he took the money, so he decided not to confess.

Hughes got away with his crimes at that bank and left to become a commercial lender elsewhere. He knew anything he tried there would be discovered, so he worked honestly for three years.

Hughes then joined a small company doing tax preparation work, handling multiple clients, but specifically doing all of the accounts, books and records for two small businesses. Six months into the assignment he could tell those businesses weren’t conducting enough oversight. They weren’t looking at bank statements, financials or at QuickBooks, and Hughes knew he could take something without them knowing.

With one business, he had a fairly significant federal tax deposit to make every month. “Me writing a check for $5,000 to a bank where I held an account was quite tempting,” said Hughes. “So, the first time I did it, I just increased the amount I told him [the client] he had to pay by $500, $600, telling myself in my delusion that I was only going to steal that $500 or $600 and that I was going to turn the rest over to the bank. Didn’t happen that way. The next time I just started taking the money.”

“The government may be slow in some ways, but that’s one thing they’re pretty good at is figuring out when you owe them money that hasn’t been paid,” said Gill. “You had to know the government was going to keep calling at some point.”

In reality, Hughes got caught because the bank made a mistake. One month the bank was flushed with cash and his boss asked him to pay off the credit line. He wrote two checks for $4,500 and deposited one into his own account. A month later, the bank called the shop when he wasn’t around and asked his boss why they hadn’t paid off the credit line. His boss thought they had because he’d seen Hughes write the check, so he opened their bank statements (for the first time in seven months) and pulled out the first check he saw for $4,500. He read off the numbers to the banker on the phone and she said it was the wrong check.

His boss called the local police and the bank called Hughes. He’d been signing checks for seven months even though he wasn’t a signatory. At this point, the FBI got involved.

Hughes eventually pleaded guilty but didn’t get jail time. He received six years of house arrest and five years of probation. A condition of his probation was that he couldn’t do financial work for clients. Out of his 71 clients, only two fired him and after he alerted them that he’d committed fraud.

Hughes would go on to do work for another client while on probation, violating the terms of probation and finally sending him to prison. While there, he wrote yet another client admitting what he’d done, but asked the client not to say anything because it would change his position in prison. They waited until he was out and then reported him, resulting in six more months of prison time.

“The first dollar, because you have a genuine financial emergency … that first dollar, you’re going to agonize about that money,” said Hughes. “You’re going to go to work the next day and you’re expecting the police to be there, probably with a television crew, because you have done this awful thing. But the next morning, you go to work, and nobody’s there. And you say, ‘I’ll never do this again.’ But stealing is going to turn you into a thief.”

*The ACFE does not compensate convicted fraudsters.

Arrays and Maps in Solidity

One third of French galleries could shut before end of 2020 due to coronavirus...

T&E fraud is rampant and about to get worse

Digital maturity: How does your finance department stack up?

Artists show us what they have been up to during the lockdown ahead of...

Hauser & Wirth announces new art and technology division with the launch of...

The Pre-Raphaelites and the Wombat