Eduardo Paolozzi’s 1947 collage I was a Rich Man’s Plaything, which can be seen in the Tate Modern in London, was one of the first works of Pop Art and even contains the word ‘POP!’

Eduardo Paolozzi was born in 1924 in Leith, a port in the north of Edinburgh, Scotland. His parents were Italian immigrants, hence his name. In June 1940, he was interned for three months after Italy declared war on the UK. After his release, Paolozzi studied at Edinburgh College of Art and later lived in Paris and London, where he established his studio.

Like the later works of Andy Warhol, I was a Rich Man’s Plaything shows a fascination with contemporary American culture and consumerism, epitomized by the Coca-Cola advert in the bottom right corner. The cartoonish font of the “POP!’ may well have inspired Roy Lichtenstein, whose paintings often took the form of cartoons.

From a 2019 perspective, the collage could be seen as problematic and sexist: The sexualized woman – presented as the object of male desire, wearing a revealing red dress – is shown smiling obliviously as a gun is fired (presumably by a man) at her head. Although the playful ‘POP!’ suggests that the gun is only a toy, the allusion to femicide is troubling, because women continue to this day to be objectified, abused and even murdered by men. 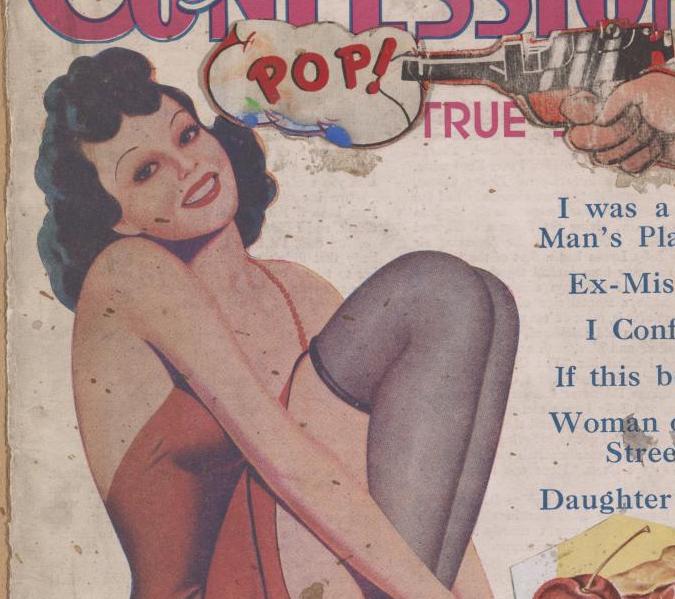 References to the woman’s wantonness – she is described as a “Woman of the Streets”, “Daughter of Sin” – point to an alternate interpretation. Perhaps the cherry represents the woman’s virginity, which was “popped” by the titular rich man, who made her his plaything until he grew tired of her. In this reading, the gun is a phallic signifier, whilst the title takes on a tragic meaning; after all, she is his “Ex-Mistress”.

I was a Rich Man’s Plaything is one of ten collages in Paolozzi’s series “BUNK” (1947 – 52), which were mainly made from magazines given to Paolozzi by American ex-servicemen. In many ways, it is a celebration of the pleasures of American culture and a way of life that was threatened by fascist totalitarianism during World War II.

No matter what we think of it today, I was a Rich Man’s Plaything has an important place in the history of modern art, paving the way as it did for the postmodern experimentation of American artists such as Warhol and Lichtenstein.

Despite his enormous success – he was knighted in 1989 – Paolozzi never forgot his humble beginnings in Leith. In 1994, he donated a large body of his work to the Scottish National Gallery of Modern Art, and a reconstruction of his studio can still be viewed there today. Paolozzi was also known for his sculptural work, and three of his statues – of a foot, an ankle and a hand, respectively – stand outside St Mary’s Cathedral at the top of Leith Walk, Edinburgh.

The post Painting of the Week: Eduardo Paolozzi, I was a Rich Man’s Plaything appeared first on DailyArtMagazine.com - Art History Stories.

Painting of the Week: Eduardo Paolozzi, I was a Rich Man’s Plaything was first posted on June 16, 2019 at 4:44 am.
©2017 "DailyArtDaily.com - Art History Stories". Use of this feed is for personal non-commercial use only. If you are not reading this article in your feed reader, then the site is guilty of copyright infringement. Please contact me at rafalkw@gmail.com

Welcome to the Brand New DailyArt Magazine! Why Art History IS Important

Airbnb May Accept Bitcoin Cash As Payment Method In 2022

We asked 687 CEOs on their plans to invest in cryptocurrencies in the next...

Experts urge OCC to include climate risk in bank exams

Procedures vs Contracts: Web3 beyond Artists, Fan Clubs, and Royalties

A new way to compensate contributors to early stage projects