Tarsila do Amaral left behind 230 paintings, five sculptures, and hundreds of drawings, prints and murals. She led Brazilian art into modernism. In her home country, she is a household name.  She was a socialite, fashionista, divorcee, who lived how she wanted. She was adored and beloved by her contemporaries and by generations of Brazilians after her death.

Tarsila do Amaral was born in 1886, in the town of Capivari, three years before the transformation of Brazil from a monarchy to a republic and two years before the abolition of slavery in her homeland. She came from a well-off family, owners of coffee plantations in the rich state of Sao Paulo (22 haciendas, around 400 slaves). Her grandfather had a nickname: Milionario. Her debut, and her most creative years, occurred in the nation- and state-building period when Brazil underwent industrialization, modernization, urbanization (1923-1933) and the Getulio Vargas dictatorship (1930-1940). This was the transformation from the Republica Velha to the Estado Novo. 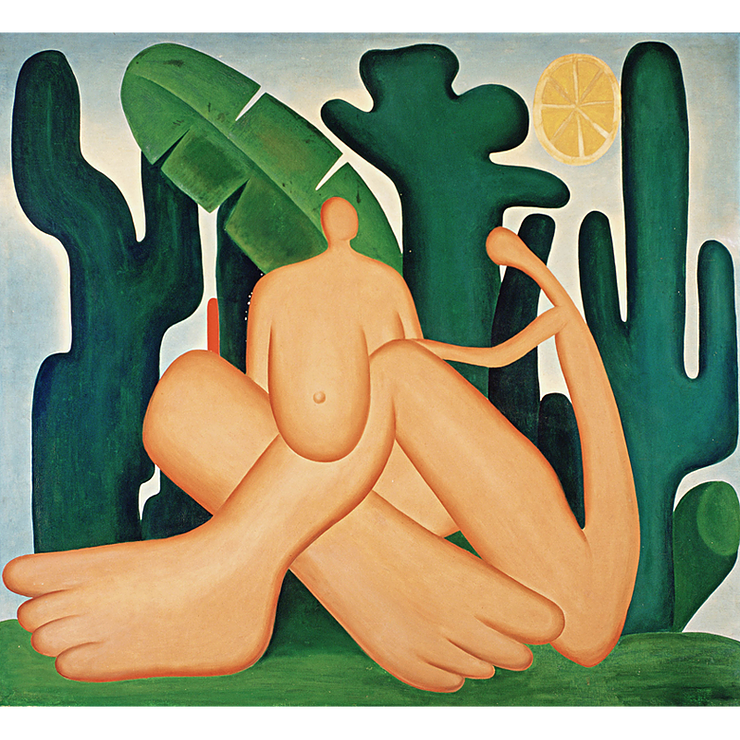 Do Amaral started her schooling at Colégio Sion, a convent school in São Paulo, then she received liberal arts education in Europe: Barcelona and Paris (Académie Julian). She travelled frequently to Europe, Latin America and Central Asia, and she visited Chile, Argentina, Spain, Italy, France, Turkey, Greece, Armenia, Palestine, Egypt, Cyprus, and Rhodes. These studies and international journeys made her very exceptional and independent.

She was hugely influenced by cubism, and to some extent by surrealism. These European stylistic influences were organic; when in France, she hung out with her masters Fernand Leger, André Lhote, Albert Gleizes, Pablo Picasso, Constantin Brâncuși, Jean Cocteau, Eric Satie, Maximilien Gauthier and Valéry Larbaud. She had a studio on Rue Hégésippe Moreau. Tarsila had a couple of solo exhibitions in Paris, the City of Light, which only proved her status in this men’s world. She was a Caipirinha (a girl from São Paulo) conquering the social and artistic circles of Paris.

She used the perfumes of Jean Patou and she dressed herself at the most en vogue fashion house of that time, the Paul Poiret Couture House. She leveraged her exoticism for self-promotion, as she recognized that the Europeans craved for something new, fresh, different, and natural. To some extent she played this card to raise her attractiveness, but on the other hand she performed the racist and caricatured ideas that many Europeans had of Brazil.

Two works from her early career, A Negra and the self-portrait In a Red Coat, give us a hint of who she was. A Negra depicts one of her enslaved nannies; a photo of her was always with Tarsila, kept in a scrapbook. In a Red Coat shows Tarsila in a lavish, deep red coat by Poiret. What is fascinating is that both paintings leave us with different feminine subjects, on opposite social classes. They shared life, but they definitely remained connected, and yet they belonged to distinct and distant worlds. The allongated breast of the Negra is a result of her exploitation: In those days, black women used to tie rocks to their breasts in order to lengthen them, and then they would sling them back over their shoulders to breastfeed the children they were carrying on their backs, while their hands were free to do other tasks.

Tarsila’s self-portrait represents a classy, well-to-do, elegant woman in her thirties. She is wearing an expensive, couture coat and she is living her life like other rich girls in the City of Light.

Tarsila stressed a couple of times to her family and friends that her vocation was to depict what it means to be Brazilian. For her, it meant among many things to be modern, to experiment and to mix European cubism and surrealism with local colors, themes, and forms. She constructed cultural modernism in Brazil. Although she was absent at the main event of the modernists in Brazil – the Semana de Arte Moderna that was held in February 1922 in São Paulo – she is considered the quintessential modern Brazilian artist.

After she came back home from France, she joined the Grupo Dos Cinco (Group of Five), invited by her friend, also a painter: Anita Malfatti.  This art collective was responsible for the most recognized and influential art pieces, which created a modern national culture, neither Tupi, nor European, nor Luzoafrican, but rather a Brazilian hybrid that emerged from the local circumstances: natural, traditional, industrial, bourgeois, racist, socialist. They stirred up the city of São Paulo culturally with meetings, parties, and conferences. It was created by Anita Malfatti, Mário de Andrade, Paulo Menotti Del Picchia, Oswald de Andrade and Tarsila. She commented on the group once: “We seemed crazy, racing around in the Cadillac of Oswald, with delirious joy, to conquer the world, to renew it”.

The power couple that she formed with the writer Oswald de Andrade was named by his brother Mario “Tarsiwald”. They created Abaporu, a painting that turned out to be a symbol of the anthropophagic movement. This artistic approach stated that it is absolutely natural for a human being to be a cannibal and to digest everything in order to create new things. It prompted the best works of Tarsila: Antropofagia, A lua and Sol poente. These three paintings are strikingly modern, and the way she communicated the essence of the Brazilian landscapes (real or fantastical) was original and sensual. The Antropofagia shows two themes from previous pieces, A Negra and Abaporu, in an embrace, in front of the jungle and cactuses. A lua and Sol poente are surrealistic, transformed visions of sunrise and sunset in Brazil.

Change of Times, Change of Style

In 1929, the world was traumatized by the financial crisis in the United States and the global economy shrank dramatically and swiftly. As a result, Tarsila’s family lost the fortune it had built in the 19th century: The estates were gone.

Her debilitated economic status abruptly affected her way of life and her art. She took a job at a museum and, later on, worked as an art columnist in a journal. In the early 1930s she changed her focus and style, becoming more attracted to social topics and communism.

In 1929, Tarsila had her first solo exhibitions in Brazil, with two shows organized in Rio de Janeiro and São Paolo. They received mixed reviews, since most of the public and art critics did not yet understand modern art, and the political atmosphere favored traditional artists. A year later her works were shown in group exhibitions in Paris and New York, where her style and attitude towards Brasilidade (Brazilianness) received a better reception and better recognition. Although she remained artistically active up to the sixties, the roaring twenties were the period when she was the most active and prolific as a painter and graphic designer.

Tarsila, who died in 1973, is today an iconic figure in Brazil. Her works are seen everywhere, in contemporary design, public art, and marketing outlets. What is often omitted in this popularization of her art is that she was a complex woman, a brave artist and a trailblazing creator of modern Brazilian identity and aesthetics.

Tarsila do Amaral: Joy Is the Decisive Test was first posted on June 14, 2019 at 4:33 am.
©2017 "DailyArtDaily.com - Art History Stories". Use of this feed is for personal non-commercial use only. If you are not reading this article in your feed reader, then the site is guilty of copyright infringement. Please contact me at rafalkw@gmail.com